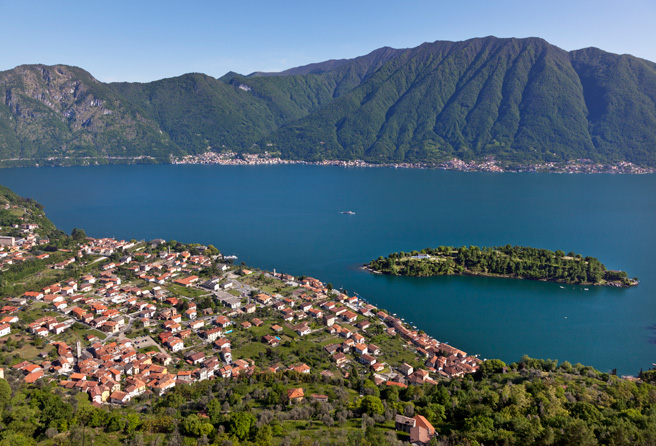 Cost for the guide (option 1):
€ 140,00 / max 30 people per guide for a maximum of 3 hours (guide for the Comacina Island + Archaeology Museum and free path to the Holy Mount, or the other way round)

Stop for lunch at a restaurant or coffee bar.

Inside the ancient hospitalis de Stabio, a complex of buildings that during the Middle Ages offered recovery to pilgrims and travelers which passed through the famous connection way called Via Regina, is it possible to visit first, the Antiquarium of the Comacina Island, dedicated to “Luigi Mario Belloni and Mariuccia Zecchinelli”, the museum where are located the archaeological finds and the artifacts which derive from different sites of the island and the territory of Ossuccio.

Transfer by private taxi-boat and crossing of the Zoca de l’Oli, which is the stretch of lake that separates the island from the mainland of Ossuccio. During the crossing time with the boat, it is possible to admire the Holy Mount of Ossuccio (UNESCO) with the Sanctuary, the Medieval Tower (property of the Italian national Trust, FAI) and Velarca, the houseboat which was created in order to transform it as a meeting place for intellectuals ( FAI). By lake it is admirable the panoramic views of extraordinary harmony between the lakeside villages and the natural landscape.

On the Comacina Island, unique in is character on Lake Como, it starts a guided tour concerning the archeological and natural area. The island represented the main figure of the roman and the high Middle Age history related to the fact that was an oppidum, an important political place and religious center. The importance of the Island in the history, is underlined by the fact that is considered a mythical place where the ars muraria of Magistri Comacini and the development process of the medieval art took its origin. The Island was also inhabited in the past and had lots of churches, a characteristic that it’s surprising by considering the little size of the island.

The wonderful story of Comacina seems to stop abruptly in 1169, the annus horribilis that marked its tragic destiny: it was devastated and destroyed by the Como inhabitants and Barbarossa, and consequently the Island declined rapidly by ending, in the following centuries, in a state of neglect.
Appreciated for its characteristic lush nature and for the beautiful scenery, the Comacina Island regained the honor deserved in the past from the 1900, through the construction of three houses for artists in rationalist style that were designed to make the island an important center for the art development, and thanks to the different archaeological excavations conducted. Nowadays the Island represents an archaeological site whose importance goes beyond the local boundaries, and which is collocated among the most interesting archaeological sites in northern Italy for the early Middle Age.

After crossing the Viale del Poeta, it is admirable the special archaeological complex, where there’s the ancient Basilica of S. Euphemia of which remains the wonderful Romanesque crypt is the most important. Inside the church of S. John, it is possible to admire the old Romanesque church under the current floor (possibility to go below the level of the existing pavement in order to watch more closely the ancient remains).

Besides the Basilica of S. John, there’s a wonderful room with a double apse decorated by Carolingian frescoes which are well preserved and by an early Christian mosaic floor. Continuing to follow the archaeological trail, it leads to three artists’ houses, atelier realized between the years 1936-40 by the architect Pietro Lingeri in Rationalist style (based on the example of Le Corbusier) ​​.
Actually the three houses with such a curious architecture, that are object of study, are residences for artists of international renown, who stay on the island to take the inspiration and create extraordinary artistic works. Moreover there’s the possibility, considering also the commitments of artists, to visit their studios and to meet them personally. Return to Ossuccio. Stop lunch.

The monumental complex of the Holy Mount and the Sanctuary of the Blessed Virgin of Salvation of Ossuccio, it is located on the western bank of the Lake Como, in front of the Comacina Island and it is dislocated along a path of about a kilometer.

It was built in the XVII century and in 2003 was included in UNESCO’s World Heritage.

During the visit it is followed the devotion path of the Holy Mount, divided into fourteen chapels which represent some examples of the Baroque architecture, built in the XVII century that contained stuccos, frescoes and 230 big polychrome terracotta statues, works of some artists of the Intelvi Valley, Lake Como.
The path leads than to the Sanctuary of the Blessed Virgin of Salvation of the XVI century, built in honor of the statue of the Virgin whom it was attributed some miraculous abilities.

← L’Isola c’è… per scoprire
il tesoro intorno a me
6. The Holy Mount of Ossuccio (UNESCO Heritage) and the Sanctuary of Blessed Virgin of Salvation →